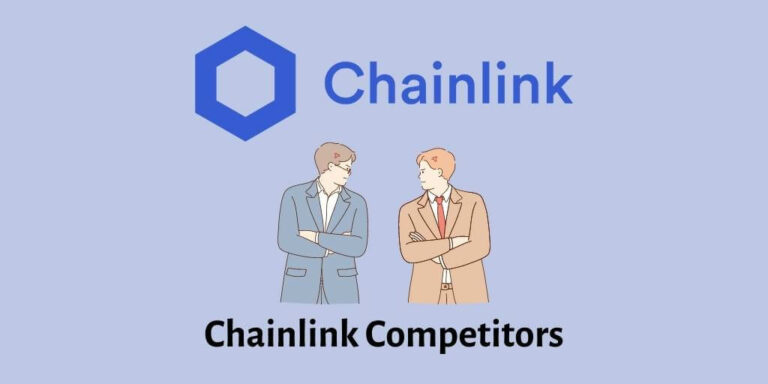 Are there any Chainlink competitors? If you need a simple answer, it is a “YES.”

That is despite the fact that there is a huge gap between those competitors and Chainlink.

The content below reveals the functionality of Chainlink and its competitors.

As mentioned, Chainlink competitors do exist. Those other rivals still have a significant distance to cover before they can catch up to Chainlink.

When it comes to “catching up” Chainlink, we refer to the cryptocurrency’s rise in market capitalization.

In fact, it is calculated as the (price of each coin multiplied by the total number of coins. It refers to the whole amount of money that the respective venture is worth. Oracle cryptocurrencies aren’t exactly cutting-edge technology.

Because of that, Chainlink’s market share is vulnerable to attack from any number of potential rivals. This would not prevent the increase in the value of LINK’s price, but rather it would slow down that increase.

Only Some Will Succeed!

The application of cryptography in the actual world is something that really interests us. The reasoning for this is that we are actually living in the glory days of crypto crap coins.

That means there are many digital currencies that have almost no practical applications yet attract a lot of investment.

In a way, it is comparable to the dot-com boom that occurred in the late 1990s. There is no shortage of impostors. That said, there are also a few genuine warriors in the mix who will survive in the long run.

Keep in mind that in 1996, the well-known Amazon was nothing more than an internet bookstore. At this point, the corporation’s value has surpassed Germany’s GDP.

The good news is that Chainlink is one of those coins showing strong success signs. It was launched in 2017 and showed solid growth.

Also, here’s a comprehensive guide for BitMart withdrawal time and fees for your reference. Let’s see how to withdraw in BitMart step by step.

In general, the majority of cryptocurrency investors are focused on big, well-known names only. For instance, they want to trade the following coins.

As of this writing, this coin is rated the 27th most valuable coin in the cryptocurrency market. With that said, mentioned below are the most searched cryptocurrencies on the internet today.

Please note that these figures can change quickly depending on various factors. It’s astonishing how SHIBA and Dogecoin have managed to become ubiquitous in popular culture despite having little practical application.

The fact that they exist is evidence that the vast majority of today’s bitcoin pricing is based on speculation. Before we talk about Chainlink’s competitors, there are some more important points to discuss.

How Does It Work?

Oracle’s native cryptocurrency is known as Chainlink. Oracle cryptocurrencies might be thought of as the equivalent of Google search engines in the blockchain environment. Chainlink is able to gather decentralized information on real-world phenomena.

The concept of bitcoin is predicated on the idea that everything needs to be decentralized. It is required to eliminate the possibility of manipulation and corruption. Cryptocurrencies such as Ethereum and Cardano guarantee the decentralization of both smart contracts and transaction processes.

Chainlink ensures that the data collection process is carried out in a decentralized manner. This indicates that Chainlink might list plenty of different businesses to determine average pricing.

It happens in the event that the execution of a smart contract requires Euros to be swapped for Dollars. The outcome, in whatever form it takes, would be quite spot on. That is rather cool, isn’t it?

The native utility cryptocurrency of Chainlink is known as LINK. This coin is an ERC677 asset, which is considered to be the extension of your ERC-20 token.

In case you were unaware, there is a massive range of different cryptocurrencies that use the ERC-20 asset standard. The ecosystem that Ethereum supports is quite remarkable.

Let’s take search engines as an example to explain more about Chainlink and its market behavior. It is absolutely true that there are other search engines like Bing and DuckDuckGo.

However, Google still has such a large market share that the competition is virtually nonexistent. As you may know, Google controls approximately 95 percent of the market for search advertising.

Likewise, Chainlink is responsible for 95 percent of the total value of the Oracle-based cryptocurrency market.

The cryptocurrencies that are listed below are Chainklink’s main contenders. They are listed in terms of the market cap. These include WinkLink and BAND.

They come with a market cap that is equal to 1/30 and 1/50 of Chainlink’s total value, respectively. So, let’s take a look at those Chainlink competitors.

Blockchain technology underpins WinkLink, a system that combines gaming and social interaction. WinkLink has a benefit over Chainlink in this regard. That is because the games and social activities are not notably among the things that Chainlink engages in.

WinkLink is an application based on blockchain that features casino games. It has been attacked for being nothing more than a gambling platform. WIN can be obtained as TRC-20 tokens (used on Tron) or BEP2 tokens (used on Binance). It is true that WinkLink is theoretically an oracle cryptocurrency.

So, I do not believe that it poses any kind of challenge to Chainlink’s leadership position. It makes sense to include WinkLink in the same category as other cryptocurrencies used for gaming.

On top of the ATOM network, the BAND protocol was developed. Chainlink, on the other hand, is constructed on top ETH network. This is specifically important because Cosmos is being billed as the “internet of blockchain.”

That is because the developers want the project to be compatible with every blockchain system. This’s a good idea since all cryptocurrency networks that use smart contracts will have a demand for oracle coins. That’s because they will want this decentralized feature to get information.

The combination of Cosmos and BAND is significantly faster than Chainlink. Imagine 2 search engines: Google and the search engine you used in 2003 on the Netscape browser. You are going to look something up on Google, aren’t you? Simply put, it’s quick.

Both Cosmos and BAND have a quick speed. This is the company’s advantage over its competitors.

It’s Catching Up at the Moment

I believe that BAND poses a significant threat to Chainlink. It is true that the BAND is only moderately successful in capturing some of Chainlink’s market dominance. Because of that, it still has the potential to experience a significant price hike in the long run.

According to what we’ve learned, if a competitor is given sufficient time, they can replicate what you are doing.

This does not in any way rule out the possibility that these initiatives are of greater value. Well, given how speculative the current state of crypto is, it’s possible that they are priced too low.

Chainlink currently has at least one thousand partnerships operating or in the process of being established. Because this number is growing each and every day, WinkLink has approximately 5-10% of the number of collaborations that Chainlink does. In fact, the BAND protocol is in a similar situation.

But what exactly do you mean when you say “partnership“? In the context of Oracle cryptos, this indicates that other cryptocurrencies or private businesses have come to an agreement. As per that, it will adopt Chainlink’s technology in order to resolve any issues that it may be experiencing.

When it comes to cryptocurrencies, most of the information is for the execution of smart contracts. It has the potential to be a quick, egalitarian, and hack-proof method for private businesses. That assures obtaining correct and incorruptible data.

Oracle cryptocurrencies are required to retrieve information for the purpose of enriching smart contract coins to function properly. Chainlink is doomed to fail if it does not have a “parent” blockchain from which it may obtain information.

It is necessary for it to have a client in order to provide its services. The current implementation of WinkLink is built based on the TRON blockchain. Tron enjoyed a successful run during the previous uptrend, but the use of the cryptocurrency has subsequently decreased.

Consider decentralized finance and non-fiat currencies when discussing “adoption.” For DeFi, we are talking about traditional banking features such as borrowing and lending. However, we are going to do this through a console that is not secure, online, and decentralized.

This platform will not ask us for our identification or any other private details other than your previous transactions.

On the other hand, Chainlink is powered by the blockchain of Ethereum. It is true that Ethereum and Chainlink are complementary to one another. Because of that, each victory that Ethereum achieves also results in a victory for Chainlink.

Chainlink has also established itself through Aave and Compound. They are two enormous DeFi-oriented projects that have market caps that are slightly lower than those of TRON.

So, that’s about Chainlink’s competitors. The specialty of this specific coin is that it is developed based on Oracle. It is absolutely true that Chainlink is not the only coin based on the Oracle platform.

As you can see, there are many competitors in the market to contest with Chainlink. However, only a handful of those does well.

We explained the top two contenders for Chainlink, but they’re well behind this coin in terms of performance.

Do you know anything else about Chainlink’s competitors? If so, please let us know.

How to Sell Safemoon on Trust Wallet?

Does Binance US Report to IRS?

PancakeSwap No Provider Was Found – Fixed 2022!