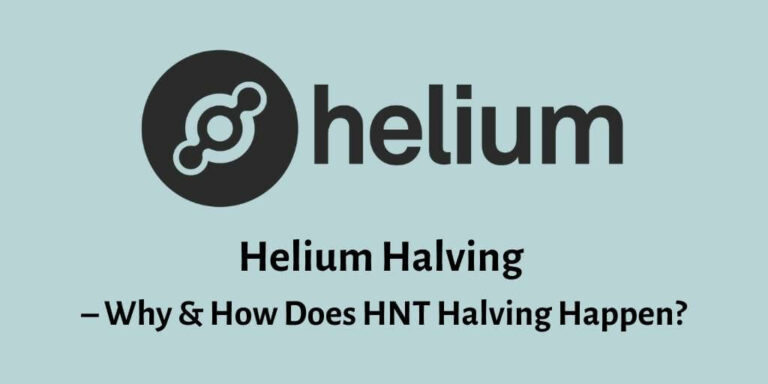 The term “Helium halving” has become rather a hot topic among cryptocurrency investors.

Do you have the same type of question and want to find out what HNT halving is? If yes, this article is just for you.

An Introduction to HNT halving

HNT’s halving event will have a significant impact on the company if you understand how it works. “Crypto mining rewards are cut in half” is the shortest definition for the term “halving“.

That means that there’re fewer new coins created in the long run. As a result, the quantity of a coin does not grow exponentially. So, it reduces the rate at which its value is subject to inflation, and so preserves its worth.

Historically, halving events have had a significant impact on crypto values. As a result of the tighter supply, there’s an increase in price. Buyers frequently acquire an asset anticipating a 50% reduction, which causes the price to rise. The period that follows has, historically, seen a gradual rise in prices.

Most analysts agree that halving displays positive tendencies before as well as after the halved date. The outcomes of every given occurrence, on the other hand, are contingent on the specifics.

How Does Helium Halving Happen?

When it comes to Helium halving, it is a scheduled process that happens once every two years. Below is a chart that explains how the HNT halving is done over the first ten years.

Well, this procedure will be repeated until the entire HNT supply has been distributed. The original plan was for 240m HNT.

However, due to lengthy block times, only 43m of the projected 60m HNT were created in the 1st year. There are, therefore, 223m HNT in total supply.

The process of Helium mining was introduced back in 2018. Nevertheless, this specific platform did not become so popular until the year 2020. However, as of today, it has become significantly popular.

A mixture of hype and supply chain concerns has resulted in a flood of orders for Helium Hotspots. Exactly because of this, will helium mining be profitable in 2022 is a topic of discussion.

Incredibly, Helium hotspots were not delivered to many fans until December 2021.

Besides, if you wonder what is Neo Tokyo NFT? Let’s explain everything about Neo Tokyo NFT Game and figure out whether it’s suitable as an investment option for you here.

How Does Halving Happen?

It’s no surprise that the volume of $HNT issued each cycle drops by half. As of August 1st, 2021, the HNT was cut in half for the first time. That implies that only 2.5 million HNTs will be mined every month rather than 5 million tokens.

With less HNT being mined, the benefits for every Helium hotspot that provide network facility are reduced. However, fear not! Receiving only half of your regular HNT is typical behavior.

In fact, the limitation of $HNT would lead to an increase in the unit price.

There will be 50 more years of HNT production if things keep going as they are! While only adding 3.6 HNT by the year 50.

The Future of HNT Will Be Brighter

HNT farming in the midst of nowhere is going to lose its power over time as a result of this. Helium mining devices that are actually utilized by Data Credit consumers will receive a higher payment.

It is true that the network spends a lot of HNT creating Data Credits (DC). However, they are sent back into transactions once HIP20 goes into effect.

Due to the fact that the value of DC is linked directly to USD price, the stability is practical. 67 percent of all HNT will be in use by the year 2022, according to this estimate.

Which Minor Should I Purchase?

Several new businesses are now offering Helium Hotspots. A list of sellers, prices, etc., are provided in the table.

You may learn more about how to maximize your profits through Helium Hotspot by reading this post.

How Profitable It Will Be to Mine Helium

HNT’s pricing is currently lower than past highs, but it remains excellent. The maximum achievement of the 8 hotspots in the region is over $1k, while the lowest is around $100. HNT’s value to all miners is approximately 3800 USD per month.

It is true that you may find plenty of hotspots this year than in the past. However, the profit margins are still amazing! This might serve as a full-time source of income for many people.

Be aware that this specific hotspot network may need to relocate or shut down in the near future. With that said, it can be prevented if new HNT-enabled applications arrive in the area.

So, that’s the current update about Helium halving.

Is It Worth Investing in Helium?

We believe that 2023 will be a fantastic year for Helium Mining. Specifically considering the prevailing selling prices in HNT and the amount of HNTs being mined successfully.

Near your hotspot, there will be a slew of witnesses. That is specifically because many individuals will have received their miners by late 2022.

Anyway, our conclusion is that Helium will be a pretty good investment. Helium halving will impact positively on the value of the coin and deliver a good return. However, we strongly suggest you do more research.

What is Neo Tokyo NFT Game – All You Need to Know!

NKN Crypto Price Prediction Up to 2031