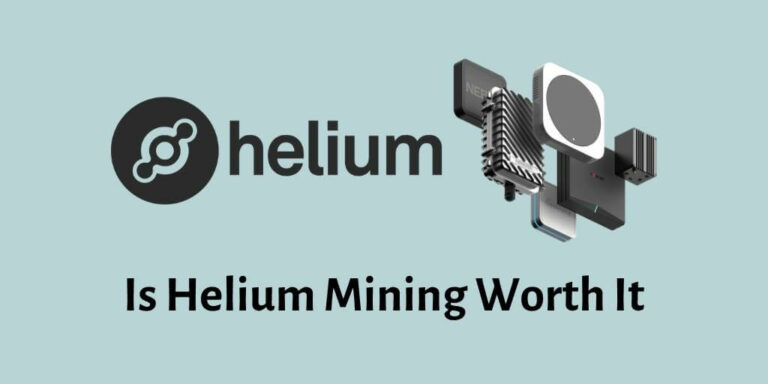 There are many queries asking, “is HNT mining worth it“. So, if you are not familiar with the concept of mining Helium, the content is very useful. Go ahead and learn how Helium mining is done.

Helium is garnering a lot of attention as of late, and there’re many different explanations for why this is. Helium is a comparatively new blockchain platform that aims to create a decentralized network for devices connected.

The network’s name comes from the helium cryptocurrency. It is not only an interesting idea but also an excellent opportunity to build up a passive income. They do it simply by assisting in the construction and upkeep of the network.

Unearthing the Truth About Helium Mining

There are a lot of Hotspots that make more than one thousand dollars in a single month. However, the question is will it continue? It’s essential to have a grasp of how the system is evolving.

That is because new hotspots will be arriving within the next few months at the very least. This specific article will first provide a concise overview of how the mining of Helium works.

And we will unravel the upcoming changes that are occurring to the Helium network. It will have an impact on the profitability of mining.

Besides, in this article, let’s figure out what HNT halving is, how Helium halving happens, and will Helium mining be profitable in 2022 or not.

A Bit About the Background

It is built by individuals who acquire certified Wi-fi hotspots to help distribute the network’s data. When using the Helium blockchain concept, the Hotspot nodes act as the network’s miners. To achieve consensus, Helium employs a variant of the concept called Proof of Work. However, Helium calls it the PoC (Proof of Coverage).

It’s true that it depends on the physical features of radio waves. That is instead of more typical methods for calculating PoW. Because of that, PoC can be used to test whether a network is functioning properly.

GPUs in a typical PoW implementation, like Ethereum, answer for a different kind of cryptographic hash coding. Rather than a 240W GPU, Helium miners require 5W so it can power the antennas and a small CPU. This is the nicest feature of the Helium miner.

Other neighboring Hotspots commonly conduct PoC in order to connect to other Hotspots. Transactions that need to be included in a blockchain’s blocks must be verified by completing these tasks. They are also the principal source of income for HNT miners.

In fact, they can also be considered the principal source of income for HNT miners. The challenger, the one who is challenged, and the witnesses all play a part in a challenge. Hotspots routinely challenge other neighboring Hotspots.

In addition to that, the respective (challenged) Hotspot is required to provide relevant data to demonstrate its effectiveness. The challenge will be witnessed by other neighboring Hotspots. They will verify that the material being provided is really what the challenger expects.

Other Hotspots often apply Proof of Coverage Tasks to validate a Hotspot’s location and data service to the network. These challenges seem to be the unit of labor needed for the system to establish consensus on new units. Miners use them to get HNT.

The challenger, witness, and the challenge make up a challenge. Hotspots often challenge arbitrary nearby Hotspots, which must transmit data to verify they’re working.

Other adjacent Hotspots will witness the challenge simply by confirming the information being sent. The most profitable function is that of a witness.

As we’ve seen, a Hotspot gains more HNT by seeing problems. To see how Hotspots generate HNT, see this post. Now that you know how Helium miners works, let’s discuss profits. Is HNT mining worth it? Let’s find it out in the next paragraphs.

So, Is Helium Mining Worth It?

Let’s get to the main point of this article. Is Helium mining worth it? Let’s find it out so you can decide whether to invest in it or not.

Dependent on your region, Helium miners can be quite profitable. According to some analytics, some Hotspots make over 2,000 USD a month.

Current Helium profitability isn’t sustainable and wasn’t intended to be so high. This means a Hotspot that ships in 8 months may not be profitable despite its great profitability.

The More the Hotspots, the Better

Now, Hotspots are compensated for building the network. The Helium network promotes extensive coverage. Thus, expanding it will boost profitability. As plenty of Hotspots come up, density will boost, and each will do less work.

However, you should expect scenarios. Helium must motivate consumers to buy costly Hotspots and help construct a speculative network. As the size of the network increases, more customers will buy data credit and use it as intended.

Hotspots/miners will be compensated for supplying this info. Once the network reaches this point, more Hotspots may well be practical.

The Number of Hotspots is Increasing

It is true that location and network state are exceptionally critical to mining earnings. So, fast development can make it pretty difficult to predict future profitability.

This quick growth means the system will be saturated in many locations within a few months. Small cities with a non-urgent need for devices connected may develop slowly and have longer-term promises.

We all expect Hotspot growth will continue and possibly accelerate in the next months. Chip scarcity is the only possible issue. Several Hotspot manufacturers have halted production, and others have extensive lead periods.

Despite shortages, more Hotspots are going live than any other market. More businesses may be permitted to make Hotspots as of today, and it will increase the supply.

I notice numerous comments on Reddit saying this is a worldwide network. And then, we will need more hotspots; quick growth doesn’t mean profit will go away.

Because of the location-dependent character of Helium miners, profitability always will depend on the local network.

Let’s focus on three situations with significantly different Hotspot revenues to illustrate the development of revenue as it grows.

Too much density doesn’t do any good. For instance, Denver is a high-density area. So, it isn’t the best place to add more Hotspots.

In fact, it has more Hotspots than needed. This reduces HNT income, as seen in the four highlighted hotspots. Hotspots yielding HNT likely have the right network in several directions and face the most hurdles in this area.

The other 2 Hotspots are presumably competing with nearby Hotspots and aren’t generating HNT. If you are from downtown Denver, you wouldn’t order a Hotspot with expectations of an easy ROI.

So, if you have the question “is Helium mining worth it”, the above information explains it all.

As per the official statistics, Denver has much more Hotspots than an area like Colorado Springs. Such areas are ripe for mining revenue. Many parts of town may yet need a Hotspot and are perfect spots to add one.

The selected town has only one Hotspot, but its revenues are substantially more than the Denver Hotspot. This Hotspot throughout Colorado Springs and this one in Denver show how HNT mining earnings work.

Because Colorado Springs come with a smaller network, it’s profitable if you start mining there. Since it requires further network improvement, a Hotspot is a good idea. So, if you follow that hint, you get an answer to the question, “is HNT mining worth it”.

As per the official statistics, Denver has much more Hotspots than an area like Colorado Springs. Such areas are ripe for mining revenue.

Many parts of town may yet need a Hotspot and are perfect spots to add one. The selected town has only one Hotspot, but its revenues are substantially more than the Denver Hotspot.

This Hotspot throughout Colorado Springs and statistics related to Denver show how HNT mining earnings.

Because Colorado Springs come with a smaller network, it’s profitable if you start mining there. Since it requires further network improvement, a Hotspot is a good idea.

This helps the system flourish and balances a bountiful HNT supply against scarcity. Helium must produce fresh HNT for miners or validators to build and maintain the network. Like BTC, Helium too has a daily circulation limit.

Earlier, the network benefits from minting a lot of tokens, but as it matures, less new HNT is needed. Scarcity can help boost value.

Halvings are excellent for the Helium market but can hurt mining profits. Since the network’s establishment, 60,000,000 Helium tokens have been minted annually. The number will reduce to 30,000,000 as a result of halving.

This means the income of the miners will be around half what they were previously. However, it may enhance HNT’s price to compensate. HNT’s worth is more complicated than halving. Thus we wouldn’t bet on an immediate jump.

Conclusion on ‘Is HNT Mining Worth It’

This suggests this area has room for expansion and could generate a lot of HNT. Data transfer isn’t a guaranteed source of Helium for miners.

It’s hard to tell the number of Hotspots that would exist whenever the network is widely used. What do you think? Is Helium mining worth it? We would like to know your thoughts.

Helium Halving – Why & How Does HNT Halving Happen?

Cartesi Price Prediction 2025 and Beyond