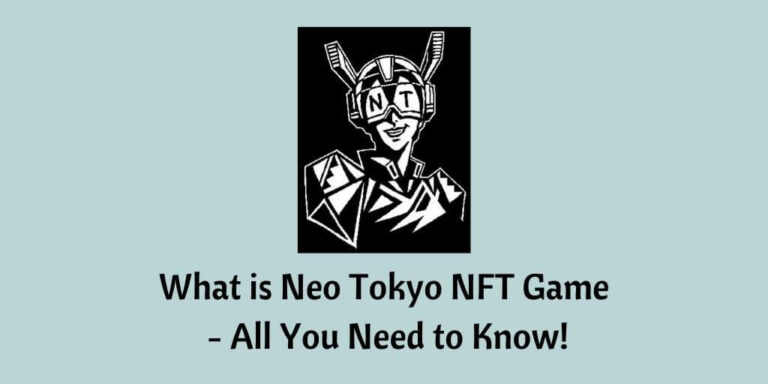 Are you looking forward to investing in Neo Tokyo NFT but have no idea about its future value?

If yes, then we have come up with this article to explain everything about Neo Tokyo NFT Game and whether it’s suitable as an investment option or not.

So, you are hooked on the growing trend of Neo Tokyo NFT?

But what is Neo Tokyo NFT?

Is it something on which you should invest your time and money upon?

Is it a suitable investment option from the long-term perspective?

We’ll try to find the answers to a few such questions today in this article.

What is Neo Tokyo NFT?

The origin of this unique concept finds its roots in the minds of two Crypto Youtubers. Names such as Elliotrades and Alex Becker crafted the initial stages of this project.

The project successfully culminated in its first phase without any hurdles. It was launched on October 3, 2021. Now, the gamers need to level up to collect the NFTs.

If they wish to be into the inner circle of whitelisted minders, they will have to decode puzzles. Only after this, they will be given the minting access.

As we hinted earlier, the initial value of Neo Tokyo NFT was null. For each successful mining, Alex and Elliotrades would receive one identity NFT unit.

The process has backfired in some way, as well. The simplification of riddles has decreased the NFT value. The newer riddles are coming up with fewer challenges. Additional hints are also provided to ease the solving process.

In fact, to claim that its value has fallen catastrophically won’t be an overstatement. More than 2500 vault cards were tossed, leading to this.

Alex Becker and Elliotrades are two blockchain YouTubers behind this idea. They launched the Neo Tokyo Identities (NFT) startup in October 2021.

The project involved using a regulated minting process for manufacturing the virtual currency.

Neo Tokyo NFTs are created by clearing an exam which adds them to a whitelist. NFTs show up as characters that convert into avatars when they are submitted.

The Neo Tokyo NFT initiative intends to build a holistic virtual system. This will benefit its users in the course of time by allowing them to earn additional income. Users will also be receiving numerous advantages.

One of the NFT projects is called metaverse gameplay. In this, NFT avatars assume the roles of fictitious people. Besides that, the initiative will engage in blockchain stuff. It will give early access to its subscribers to all these online slots.

Neo Tokyo NFTs have surged in value as buyers see them as a method to generate additional income. This, in turn, can help them in acquiring experience of the virtual world.

A huge number of firms are heavily concentrating on the creation of the metaverse. This is expected to have a greater market value than the actual global economy in the coming few decades.

The mysterious mechanism of Neo Tokyo NFT is what makes it appealing to investors. Basically, the idea is to create a virtual living town. In this town, each individual will carry their own unique digitalized identity.

The concept is unprecedented and unique. The data of these virtual identities are stored on a blockchain. The whole effort has been endorsed by a small community of innovators. These initial startup holders propelled the concept.

Interestingly, they were the only ones who could access the mining process of the game. Their efforts seemed to have born the fruits.

As the value of the NFT now holds at a whooping 21.1 Eth. Let’s do a comprehensive study on this topic.

Besides, reading this Rocketpot Casino review is a smart approach before stepping into the world of online gambling.

Neo Tokyo movie was launched in the year of 1987. It was highly admired and considered a masterpiece in the anime industry. Events in the movie take place in a post-apocalyptic city.

It consists of three stories lasting 50 minutes each. The mentioned stories had different writers and different directors working on them.

Neo Tokyo NFT has been inspired by the movie. However, they are not actually connected with one another. The NFTs represent the collections of textual information on diverse topics. As per the claims of Becker, NFT has shown the fairest value reduction in history.

The best part when it comes to Neo Tokyo is the absence of pre-sailing. The initial mining could be done without any upfront costs. Becker and Elliotrades would receive one NFT unit for every successful mining.

The idea is to craft a concept that looks after the requirements of the people. The community should be served in the process.

It should promote an environment of inclusive participation among people. The Neo Tokyo NFT Collection is split into four parts:

So the game consists of characters, each based on its unique identity. These uniques identities can be equated with your actual identity. The characters can have any gender or other factors to distinguish them.

The character can either be a helper or a club owner, depending upon the game’s level. The appearance can also be customized.

Each character consists of their own unique skills and talent. The idea is to create a practical depiction of life within the game.

The game has a card system. It works very much like our actual credit cards. You get a game account to store the currency.

The currency can be used to purchase in-game objects. The card serves the purpose of withdrawing the currency stored in your account.

This is the inventory of the Neo Tokyo NFT. You can consider it as a departmental store.

You can purchase garments, headgears, weapons, and other objects that are a part of the game.

The map of the Neo Tokyo shows it’s more like bits of land scattered all over the place. These scattered bits consist of different communities.

The collections of land primarily excite many gamers. If we consider the example of Decentraland, it has shown an exceptional boost in its market value.

NFT: Neo Tokyo Identities According to Opensea, there are 88 NFT registrants. There are over 2000 in-game objects available for trading.

The Floor Coin value has been 21.1 ETH since around December 19, 2021. Via Tweets, its developer, Alex Becker, discussed the Neo Tokyo NFT game.

While his comments were quite vague, he did acknowledge a few topics, including:

Where Can I Purchase The Neo Tokyo NFT?

The procedure of releasing new NFTs is yet another mystery in the chain of riddles. So, where can you get the Neo Token NFT?

This procedure is only open to those who enjoy solving puzzles. The whitelist was split into categories on October 3, dubbed “The Upload Day” by their audience.

They were granted 10 minutes to Reveal the details. Users were routed to the Neo Tokyo NFT webpage for further assessment.

This was when they were about to complete these listings. These listings were characterized by scripts. Lastly, individuals were provided Etherscan account numbers to validate.

Just on October 16, a remark drove all Neo Tokyo owners into a full-house excitement. The message had an agreement that was referred to Mint Storerooms.

The procedure was the same, with the exception that this period was set to two hours. Whitelist might very well rob the treasure if holders were unable to get it. As a result, the competitive pressure grew.

Because the whole thing is hidden, the money speaks for itself. The Coin Rates surged sharply in mid-December. This happened roughly two months after its inception, under clouds of 23-24 Eth. The Neo Tokyo NFT Price Forecasting predicts the price looks to grow higher each day of December.

While the quantity of sales appears to decrease due to the general NFT’s intricacy and age, this is the case. As a result, the price is projected to rise. As of December 19, 2021, revenue is down to 1 NFT transacted on a daily basis.

To summarise, Neo Tokyo NFT targets the modern pool of investors. Particularly those who are seeking a profitable investment inside the NFT universe. The Neo Tokyo Identities are on display on the NFT’s online webpage for the public to see.

They’re a spectrum of shades filtered via depictions of knights. On the Neo Tokyo Open Sea global market, it is expressed as scripts. Holders are curiously waiting for larger revelations. At the same time, they are intrigued by the craftsmanship of the program’s creators.

Seeing the current momentum, we can expect a positive return on investment from Neo Tokyo NFTs in the coming few years.

Neo Tokyo is enjoying global popularity presently. The chances of it receding anytime soon are slim. People are quite excited about its future potential.

We have revealed many things about it in our article. However, this is not all. There’s so much more yet to be discovered.

We will try to keep you up to date with any advancements in this field. Any notification will be conveyed to you without the slightest delay. Till then, happy investing.

COTI Price Prediction Up to 2031